See How It Works

Please contact our Concierge team on the link below if you would like them to make enquiries with authorised agencies on your behalf. We can save you valuable time by doing the desk research on your behalf and will then let you know which authorised retailer has the watch you want in stock. At this point we step back and you pick up the dialogue with the authorised retailer yourself. We are not involved in any way if you decide to proceed to purchase.  With this brand we only offer to save you valuable time by doing the desk research for you. So you can enjoy more time with family and friends!  Even better our desk research service is entirely complimentary.

Equally for this brand we are not able to offer a delivery service and your purchase must be made personally by you in the authorised retailer’s store.

Please submit all enquires via our Concierge Service 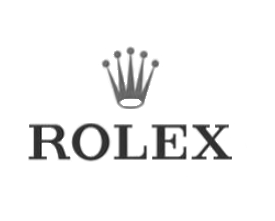 In London, 1905 Hans Wilsdorf started business age 24, using movements sourced from a small company in Bienne. In 1908 the Rolex brand was established, a name chosen as it was precisely short enough to look good on a watch dial.

The company immediately began striving for absolute accuracy and by 1910, a Rolex was the first watch to ever receive the Chronometric Precision award. Just four years later the prestigious Kew Observatory awarded Rolex an A-grade in precision, which until then had only been given to marine chronometers, and this is how Rolex earned its reputation. In 1919 the business relocated to Geneva and Montres Rolex S.A was born.

1926 saw the birth of the first waterproof Rolex. Named after the hermetically sealed sea creature, the Rolex Oyster was ahead of its time but proved to be an enduring classic. The Oyster DateJust followed in 1945 and continued to push boundaries with a date window, and became a pillar of the Oyster collection. The genius of Rolex brought game-changing and fabulous inventions into the industry, including:

The brand is now famous for sponsoring legendary sporting events such as sailing, Formula One and three day eventing, capturing the spirit of the sports in iconic models the Submariner and the Daytona, and its name is synonymous with status and high achieving individuals. Rolex is also very active in the beaux-arts and high fashion culture.

Are you a member? Login now

Thank you for registering with us, you will shortly receive an email to create your password.

Thank you for your enquiry, you will shortly receive an email to create your password which will allow you to access your enquiry responses.